Quote of the Day

"We're only here briefly, and while I'm here I want to allow myself joy. So fuck it."

RE:View: Things To Do In a Retirement Home Trailer Park When You're 29 and Unemployed 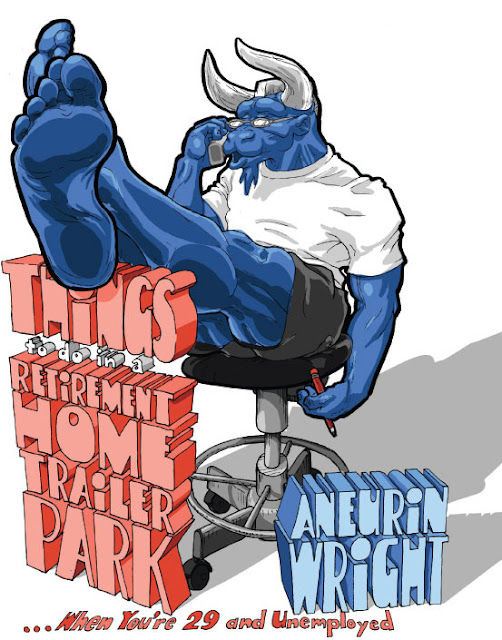 A frustratingly frequent piece of advice given to young writers is "Write what you know"; something that newcomer Aneurin Wright has taken to the next level with his debut graphic novel/memoir, as Things To Do tells the moving story of what happened to himself when he was 29 and Unemployed, looking after his father Neil in a Retirement Home Trailer Park.

Neil is sick. Emphysema ails him after a lifetime of cigarettes and stress. Nye (that's Wright himself) is his son, struggling to find work after graduating from art school and finds himself in a predicament -- to care for his imperfect father through his illness as per the rest of his family's wishes. So off he sets to spend the next number of months beside Neil in a trailer. Oh yeah, and Nye's a blue minotaur and Neil a blue rhino... 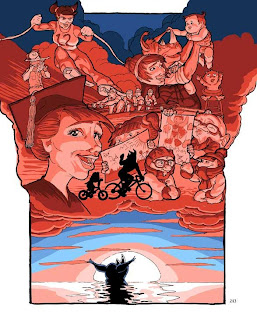 Whilst the majority of the other characters around them are human, this bizarre animal imagery is never addressed full on; we just sit there and take it. But the reasoning behind it is plentiful, with ideas as obvious as giving the book a more fantastical look in art direction and colouring (the blue, red, white and grey dominate the well drawn pages), to subtler narrative cores that pay off astronomically in the long run. As such a personal journey for this writer/artist, the cartoonish feel is essential so that it's visually more engaging and displays the distance set out between writer and experience. And thanks to the sharpness of the storytelling, it blends into the book with ease and style.

With this in mind, the 300 page book comes alive through three distinct acts, each with a good 12 or 13 chapters (varying in length) that bring Wright's comedic, dramatic, emotional or just plain imaginative chops to light. There are scenes so varied that one may consist of nothing else than Neil getting a sponge bath, while another shows Nye's frustration through a dream-like, crime fighting situation. Family, epiphanies, forgiveness, regret, anger and realisation: all major themes. When I say this book has everything, I mean it -- through the humanity of the story (it is true, after all) these things are so present and come from a very real, very first hand "I felt what you're feeling times 10" place, and that carries true in dialogue, imagery, pacing; EVERYTHING. 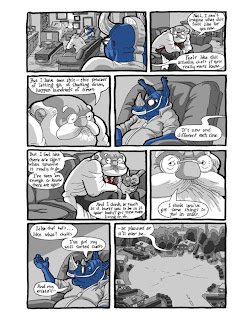 Now things aren't all about the present, mind, as Wright consistently throws around the framing of time -- glimpses of childhood, patches of the recent past, even flashes of the imagination and the unruly subconscious of a man coming to terms with his Father's impending death. Admittedly jarring at first, but as the jumbled story progresses things shape out and we're given more fleshed out characters and relationships as a result, which is unimaginably important for the conclusion.

As if the book wasn't brilliant enough on all these other merits, Wright completely knocks obliterates it out of the (trailer) park within the last 80 pages with the most moving moments I've ever seen in the comic book/graphic novel medium. At this point, through the snivelling, heaving, sobs and streaming tears (seriously), you realise all this stuff -- the humourous touches, the flashbacks, the animal charactertures, every last minor detail -- has been plotted excruciatingly for the inevitable finale.

At the heart of Things To Do lies almost what you'd call an everyday story of life, death and family. But through Nye's emotionally driven scope it transcends into something indescribably huge, human and heart wrenching and warming at the same time. It's in this way that Wright has captured the essence of how moving real life can be for everyone and everything in this world once put in the right story structure and imagery.

Now this is one of the best things I've read, medium regardless, in my life. And it's only his debut. I think that warrants a slogan...
Nye Wright: Future Talent, No Doubt.

ATR
Posted by Arnold Thornton-Rice at 20:53